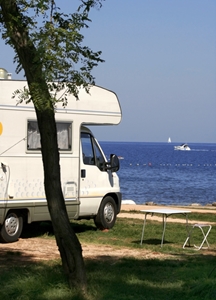 Caravan registrations have increased faster than any other vehicle type in Australia, jumping 5 per cent year on year, according to the latest Caravan & Campervan Data Report by BDO.

"Every year we see more and more people getting involved and seeing the sensational sights Australia has to offer," said Caravan Industry Association of Australia Chairman, Mark Lindsay.

Owning a caravan used to be out of reach for many, but with caravan finance easy to obtain, almost any family can live the dream.

The positive effects of the growing popularity of caravans and camper trailers is not just confined to owners. Various reports show that the advance is profiting Australia's economy, too.

Between 2006 and 2013, the total number of vehicles produced in Australia declined by about 100,000, according to a report released by the Australian government's Productivity Commission.

This had a direct effect on manufacturing-related employment, which dropped by 40 per cent in that period and is still decreasing.

You'd think that with this downturn, the caravan industry would be suffering too, as according to 2015 research by the Caravan Industry Association of Australia, 70 per cent of RVs (recreational vehicles) purchased Down Under are Australian-made.

Amazingly, the manufacturing market for RVs has continued to grow, increasing production by 16 per cent year to year.

"In the context of failed car manufacturing, it's great to see our industry punching above its weight, producing product that Australians want to use," said Stuart Lamont, CEO of the Caravan Industry Association of Australia.

Roy Morgan Research recently shared a study revealing that last year, nearly half of all Australians went away at least once for a short regional break away from home.

Expenditure by caravanning and camping consumers is a ballpark figure of $7 billion annually, the Economic Benefit  Report - Commercial Caravan Park to a Local Community by BDO states.

According to the Caravan and Campervan Data Report, there are approximately 170,000 holiday parks dotted across Australia, which all benefit from this consumption.

Of course, the influx of people staying at holiday parks means the whole surrounding community prospers too.

"Businesses here rely on the holiday crowds and without the facilities in the park, people would go elsewhere and spend their money outside the community," said an Australian holiday park owner who was surveyed in the Economic Benefit Report.

If you would like to join the growing group of Australians living it up with RVs, talk to AAA Finance. We have a panel of more than 23 lenders who can secure you a great deal with caravan finance, even completing your application within 24 hours.

Why surfers and caravans are a match made in heaven