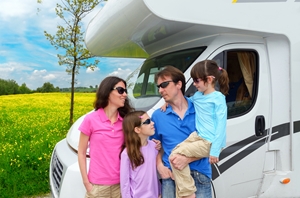 Australians' sense of wanderlust appears to be as strong as ever, with people largely undeterred by problems in the national economy.

The September 2014 quarter National Visitor Survey from Tourism Research Australia (TRA) showed that domestic trips are on the rise. The number of overnight trips taken on Australian shores was up 5 per cent from a year earlier, largely driven by visits to family and friends.

No matter what your motivations for travelling, the freedom and flexibility of a campervan has its benefits for quick holidays. If this sounds like the sort of lifestyle you'd like to lead, it might be worth taking a closer look at camper trailer finance.

Where are Australians choosing to holiday?

In a country as vast and diverse as Australia, holidaymakers have no shortage of destinations to visit. Whether you want a city break or somewhere a little more remote, this country certainly has it all.

However, data from Roy Morgan Research suggests that some types of holiday are more popular than others. It found that in 2014, as many as 50 per cent of Australians over the age of 14 took at least one short domestic trip lasting one or two nights.

In the most part, they stayed in their own state and headed to rural destinations. Melbourne residents were the most inclined to take a short break, as 37 per cent went on holiday for up to two nights.

This was followed by those living in Sydney and Hobart, of which 36 per cent and 35 per cent opted for getaways within their home states.

It also seems that national parks and forests are popular destinations among Australians. Almost a fifth (18 per cent) of respondents visited one of these locations on their last trip, the Roy Morgan Holiday Tracking Survey reveals.

Where are people staying?

With a campervan, even the most remote locations could be more easily accessible than you think. Just load up the van and get behind the wheel - who knows where you will end up?

Figures from the Australian Bureau of Statistics (ABS) indicate that more people could be doing just that, not least because tourist accommodation occupancy rates are falling. Western Australia and Victoria saw a decline in demand in 2013-14, despite the rise in domestic visits highlighted by the TRA.

The seasonally adjusted occupancy rate over the June quarter 2014 was 61.6 per cent in Queensland, which marked a decline of 2.1 per cent from the previous three months. Western Australia's stood at 62.7 per cent, down 2.7 per cent.

Two caravan spots to check out in the summer holidays