Why surfers and caravans are a match made in heaven 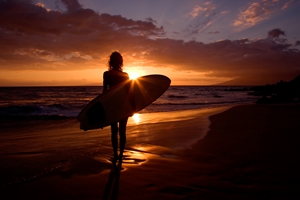 What do surfing and caravanning have in common? Possibly more than you'd think.

Leading organisations of both activities seem to think so too.

An August 2015 report from Surfing Australia reveals that the Caravan and Camping Industry Association (CCIA) and Surfing New South Wales (SNSW) have signed a partnership in a bid to better unite both of these huge industries. Through this, both organisations aim to reach a greater audience.

This is a move that makes sense on just about every level. Both industries represent activities filled with passionate enthusiasts who have a great love for the outdoors.

Here are a few reasons why you should look into getting caravan finance for a new camper van if you're a surfer.

Surfers are always after the best surf locations. In Australia, that means making a trek around a few different regions and states. Australian Geographic names Bell Beach in Victoria, Point Break in Queensland and Byron Beach in New South Wales, as just some of Australia's many great surf spots.

If you aim to make a tour around some of these legendary beaches, you could probably get by on jumping from motel to motel.

Or for more excitement, you can take a piece of home wherever you go by journeying on a caravan. That means no endless routine of packing and unpacking, and no wondering if the holiday park or motel has all the comforts you need.

Go take out that camper trailer finance and it'll simply be you, your caravan and the ocean.

Being near the ocean

Passionate surfers have a great love for the ocean. The rippling white foam. The smell of sea salt. The slow crescendo of crashing waves.

Being in a caravan means you'll have opportunities to set up shop on an open space or in a caravan park not far from the glorious sea. As the morning tide comes in, you'll be able to get right out of bed, into your skins, and hit the surf in no time at all.

The Crescent Head Holiday Park in New South Wales has Killick Beach, one of Australia's longest point breaks, literally at its doorsteps. It doesn't quite get much closer than that.

According to the Caravan Industry Association of Australia, 1,965 RVs were produced in June alone, which is an increase over last year's figure (1,734). Why not jump on board and join this growing breed of road adventurers. If you're not sure how to get started, get in touch with AAA Finance to see how you can get easy camper trailer finance sorted.

Where to go til Monday – Gold Coast

The most scenic camper trailer campsites in Victoria