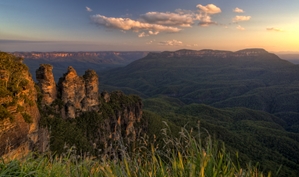 Even though the Australian dollar has been in decline against many international currencies, including the US dollar, we don't seem to be slowing down in our overseas travel. Research from Roy Morgan last year indicated that the number of people whose next holiday will be overseas has risen on 2010 levels,  levels of those who intend to take a domestic holiday has not risen higher than the March 2010 percentage.

And according to new work from IBISWorld, domestic vacations are only to grow minimally in the next five years while international trips will go up more significantly. As the domestic market share falls, certain sectors within it will step up - and it's great news for your planned caravan finance.

It's no secret that Australia has a heavily ageing population. According to the intergenerational report released by the Federal Treasury, the number of Australians over 65 is set to double in the next 40 years. With this will come a fresh, large wave of grey nomads, which IBISWorld believes will underpin domestic tourism strength.

"Caravan parks and camping grounds operators are expected to be a key beneficiary of current and future domestic tourism trends," the IBISWorld article by Ryan Lin from May 11 stated. Anyone who has been considering a secured personal loan to buy a vehicle might take this as the sign to buy a campervan - no matter their age.

While the grey nomads are the archetypal campervan purchasing market, the IBISWorld research also suggests that the audience for these (and therefore, caravan loans) is going to expand in the coming years.

"The affordability and growing sophistication of motor homes, a weaker outlook for petrol prices and the growing prevalence of high-quality facilities provided by camping grounds and caravan parks are also projected to appeal to young families," the research reads.

With this in mind, a caravan could be an ideal purchase for your family. It allows you to all travel as a unit in a much more affordable manner than by air. On top of this, the functionality provided by a campervan means you can be self-sustainable on the road.

When you decide that a campervan loan is the decision for you, make sure to get in touch with AAA Finance. We have a panel of more than 23 lenders who can secure you a fantastic deal, even turning around your application in under 24 hours.

The greatness of the grey nomad lifestyle

Try our easy to use Caravan Finance Calculator