How to get around busy traffic 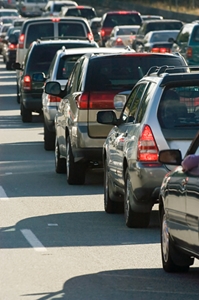 There is now evidence that traffic in Australia is indeed getting worse, as revealed by the government's Australian Infrastructure Audit.

The report asserts that if serious steps aren't taken to manage the problem, the costs of congestion are likely to undergo an increase of near 290 per cent by the year 2031.

"In Perth, Melbourne, Sydney, Adelaide, Brisbane and Canberra, without investment in new transport capacity and/or means of managing demand, car travel times are expected to increase by at least 20 per cent in the most congested corridors," the report states.

A heightened number of cars on the road is likely one of the main reasons for the bleak forecast.

In the last decade alone, the number of motorists in Australia has increased by nearly 20 per cent, according to a recent report from Roy Morgan Research.

In light of all these dark figures, here is a solution to the growing congestion problem.

Australians are getting clued up to the advantages a motorbike holds over other vehicles in traffic. According to the Australian Bureau of Statistics, the total number of motorcycles in Australia increased by 25 per cent between 2009 and 2014.

Here are a few reasons why you should consider quick and simple motorcycle finance.

Motorcyclists are able to weave their way forward through frustrated motorists in gridlock, effectively making congestion irrelevant. This is called lane filtering, and is completely legal provided the rider doesn't exceed 30km/h and it is safe to do so.

An increased number of vehicles on the road inflates the demand for parking. Motorcyclists can park their bikes in motorcycle bays peppered throughout Australia at no cost. Melbourne is the only capital city that allows parking on the footpath, provided pedestrians still have free passage.

A 2013 report from the Australian Bureau of Statistics found that of all the road-going vehicles in Australia, motorcycles had the lowest fuel consumption. This means you're getting to your destination faster, cheaper and more efficiently.

If you're in the market for a motorbike, talk to the team at AAA Finance. With access to 23 lenders we have a wealth of motorcycle loan options; we can even complete your application within 24 hours.

How to ride safely after a break