How to get pre-approved finance for your next sport bike 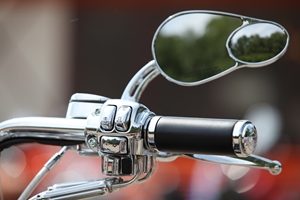 Feeling the wind on your hands and knees while straddling a big, powerful motorbike chassis is something that no other experience on earth can replace. In fact, it's akin only to horse riding in the way you sit, but you'll go much faster and having far more control over what your 'vehicle' is doing.

That's a fantastic combination, and it's no wonder so many people are moving to get onto the back of a bike. The Australian Bureau of Statistics reports that in 2015, there were 807,215 registered motorbikes on our roads - a figure that has increased by 22.3 per cent since 2010. That's a staggering amount, but when you take into account how much more affordable a new motorbike is compared to a new car, it's not surprising.

Getting onto the back of one can be a whole lot simpler now as well. AAA Finance offers motorcycle finance that can get the keys in your hands much sooner than you be able to save up for one yourself. Why wait, when you can get comfortable on the back of one of the great bikes below before summer comes back around?

A photo posted by Harley-Davidson (@harleydavidson) on

Harley-Davidson is world-renowned for producing motorbikes that not only sound like absolute beasts, but also look amazing. The Forty-Eight is no exception, and having the option to paint in Vivid Black - a part of the 2016 Hard Candy Custom paint promotion - is going to make your bike stand out even more.

The Forty-Eight is a classically styled bobber that has aggressive styling to go along with the relaxed seating position. The exhaust manifold, or chrome staggered shorty exhaust, will make your garage rumble when you start the motor, and the appearance down the side of the chassis is something of a hark back to bikes of old.

There's no mistaking the modern twist on this machine though, and getting pre-approved for motorcycle finance today could be the first step towards actually riding one home from the showroom.

A photo posted by Gixxer Kidz (@gixxerkidz) on

More of a classic sport bike shape, the GSX-R1000 is a machine that has been designed to scream. From inside your helmet, you probably won't get the same effect from the pipes under your feet, but you'll know that everyone you ride past is absolutely aware of your presence on the road.

A four-cylinder, liquid-cooled DOHC engine powers this beast around, and at just 205 kilograms, that's a serious amount of potential. In fact, the 999cc engine will rev right up to 15,000 rpm, and you'll feel every single one of those being beaten into the ground by your wheels. The instrument cluster is designed for your pure enjoyment as well. A massive dial with rev counter and rider-selected options dominates, while next to that is a digital speedometer so you'll know exactly what you're doing around the windiest of Australian roads.

Brembo ABS brakes are also equipped, and this bike wields them comfortably. Brembo is well-known among motoring enthusiasts as a company that favours performance over many other specifications, and with brakes, you will have peace of mind knowing that you have some of the best performance brakes on the market.

A photo posted by 4Cilindro (@4cilindro) on

Kawasaki Ninja's are among the most recognisable bikes on the market. Older editions have been released with bright green and red paint work, distinct from any other marque's offerings.

With the Ninja ZX-10R Winter Edition, however, you've only got the one, understated, immensely cool choice of Flat Ebony.

There's something about a black sport bike - a piece of engineering that has been designed to accelerate at exceptional rates - but doesn't jump out in a crowd purely because of its colour. Instead, you'll find it sits among a crowd, until you start the motor and are revving all the way up to 13,000 rpm, that is.

Have any of these three bikes caught your attention?

Keep the throttle open and you'll make the most of the 147 kilowatts of power and 113.5 Nm of torque. Get right up to the top of the rev limiter and you'll be holding on for dear life, although that's part of the fun of having a mental sports bike underneath you.

Have any of these three bikes caught your attention? We think they're a special bunch, and it could be that you find yourself on the back of one well before the start of summer. After all, what's more fun than travelling around the Australian coast on the back of a big, powerful bike in the summer sun? Stopping off at the beach for a lovely view before getting back on the road could be a normal day for you, and doing it on the back of one of these will make it even more enjoyable.

Get in touch with AAA Finance today and talk to one of the team about motorcycle finance - it'll be the best step towards buying one for yourself.

Motorbike finance – what are the benefits of owning a bike?